Back to training and racing 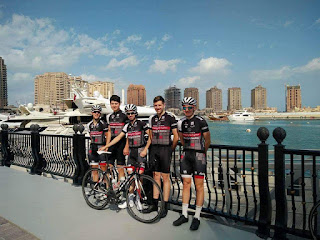 After a successful 2015 season I took 4 weeks off the bike to recover from a tough 10 months of racing and get motivated ready for the long endurance miles over the off season. This year has been a bit different to previous years due to having a 4 day UCI stage race in Qatar from 16th till 19th December. This meant I had 7 weeks to get race fit after my time off. In previous years I have used November and December just getting long miles in at a set power zone. So this year I have had to get the miles in as well as the intensity to get back to race fitness quickly. 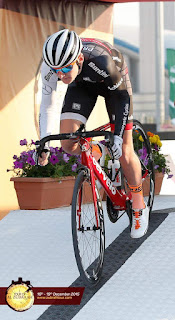 I headed over to Qatar on 13th December to take part in The Tour of Al Zubarah. This race was a 4 day UCI 2.2 stage race. Getting there early gave me a few days to get some riding in and adjust to the temperature change before the race started. The temperature was mid 20's which was perfect for racing in.

The race started with a 3.3 km prologue which was on a technical course. The course had a mixture of tight turns narrow sections and rough surfaces. This made for an exciting course, suited to crit riders and risk takers. I was able to get 15th on the day 19 seconds down on the winner and 8 seconds down on the U23 leader. My team mate got the U23 jersey so the teams goal was set for the rest of the race.

Stage 2 was 130km had winds of 14kph which in the dessert feels a lot more as there are no hedges to hide behind. We knew from the start the race was likely to split in the cross winds. The team had a plan to send a rider up the road early on. So I took that role and got away after 2km of racing and did the first 25km on my own with a rider sitting on my wheel due to his team mate in yellow he was refusing to work. When we were court the peloton had split into small groups due to the winds. So I got in the wheels of the first group and we worked well to hold the chasers off and make time gaps. All the main riders were in the front group including my team mate in the U23 jersey. So we worked out a plan for near the finish for him to follow the yellow jersey and I would cover moves and try getting away. The last 30 km was full gas with lots of attacks, I got in a move with 10km to go and was in a good position but it all came back together with 2km to go and final finished 11th on the stage and moved up to 12th on the general classification and 3rd U23. Unfortunately my team mate was involved in a bad crash with 4km to go and wasn't able to finish the stage. This meant the team plan had changed and everyone had more free roles to aim for stage wins while my goal was to move into a top 10 on GC and keep my U23 podium position.

Stage 3 was 140km with very little wind. The plan was to be aggressive from the off and get as many of the team in the break away. Unfortunately I had 2 mechanicals early on while crossing to the break and ended up 600m-1km behind the race due to the second mechanical happening when changing my rear wheel. This meant I had a long chase back to the group and by the time I had got back into the peloton the break had over 1 minute but the team had 2 riders in it so I just had to follow moves that could be a danger to my U23 position. After 30km of attacks the race split and was getting controlled by the yellow jersey for the last 20km and the race came back together with 5km to go. The stage ended in a bunch sprint where I finished 20th and moved up to 11th on GC and retained 3rd U23.

The 4th and final stage was 120km with 10km winds, which were mainly head and cross winds. The team were aggressive at the start again, a 3 man break away got a 30 second gap and my team missed it so I eventually was able to escape and bridge across to the break. The race split behind and a group of around 20 riders came across to the break in the cross wind. And this group ended up staying clear and increasing the gap. As it was on the rode I was 2nd U23, as some high positioned riders had missed the split. Attacks started with 15km to go. I followed some dangerous moves but nothing came of them. At around 10km to go a 4 man move got clear and I tired to get across but was just hanging in no man's land with the riders behind coming across to me. I sat up and allowed other to work but no one was prepared to work. The 4 man move ended up getting 52 seconds and I came in 12th on the stage.

My first UCI stage race went well with me ending up 10th on the general classification and 3rd on the U23 classification. I'm happy with this result as it's only December and I've only been back training for 7 weeks before going to the race. This is a good indication to where my fitness is ready for the 2016 season. 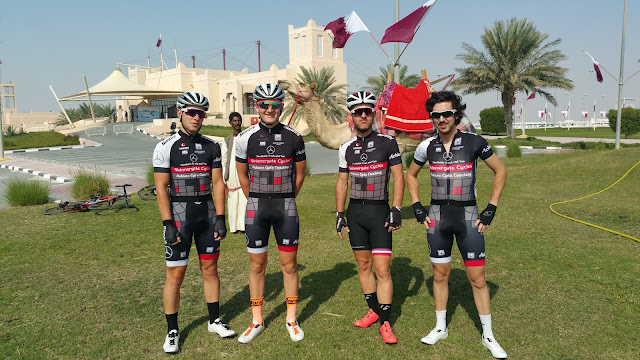 After Qatar I have taken it easy as I had been training harder than normal for the time of year. I'm not too worried about taking it easy for the 2 weeks I have at home over Christmas and New Year, as I go to Calpe, Spain on 4th January 2016 for 8 weeks. Now 2016 is only a day away I'm really looking forward to training hard and racing more often.