This is the highest altitude race in the world so a bit of acclimatization was required before hand. The team seen us there 12 days before the race started to get use to the altitude and get some riding in to see how our bodies get on. Where we were staying was just under 2500m and there were rides close by that took us up to 3500m.

I personally thought the altitude would affect me more than it was, I was breathing slightly deeper than usual but that was it. In the 12 days leading up to the race we managed to acclimatize, train and then tapper so it was a perfect amount of time pre race.
The race will be the longest I have ever done as well as the highest UCI level I've raced at. It is 13 stages with 1 rest day after 9 stages and it covers nearly 1900km. The shortest stage been only 66km but that's also a mountain top finish day topping out at 4120m, then the longest stage 237km.
Tour of Qinghai Lake: 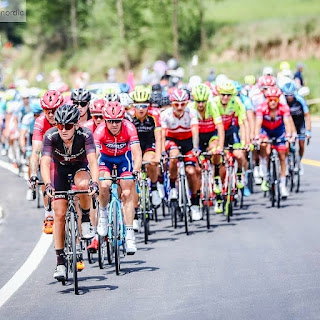 Stage One 161km. Everyone knew it was going to be a sprint and 3 guys just floated off in the first kilometer then we ended up first team and just decided to take on the role of controlling the pace. The team did a great job at it. I ended up doing about 70% of the stage on the front making sure our sprinter and GC guys had it easy while Sam could look after Tipper for the sprint and Rob on bottles that day. I eventually came of the front with around 8km to go after a rapid chance and then time keeping the pace as high as possible with Minsk to stop late attacks going. Unfortunately Tipper had bad luck and bad legs for the sprint and didn't place anywhere. Still the team showed from the stage that we were there to race our own race. 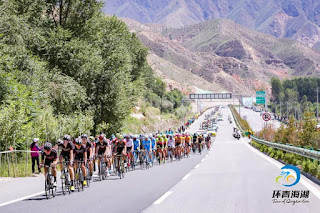 Stage Two 114km in wet conditions around the city of Xining. Again an early break of 3 got away on the first lap. The team didn't want to chase and the yellow jersey team didn't want to either so after a while Sam told me to attack cause a chase and it work we halved the gap in half a lap and then teams got more organised and other teams came to the front to work and control thing. It ended in a bunch sprint where Tipper was unlucky again.
Stage Three 133km with a HC cat climb in the middle of the stage. The team plan was for Sam or I to get in the break. Sam managed to get in a move but it was only him and one other so it ended up been a hard day out for him getting caught with 3km of the climb to go. I got distanced on the climb but managed to get back into the front group where our 2 GC guys were. I managed to get 23rd on the stage but It was still a group of around 80 riders.
Stage Four 100km which will help sort the GC out massively with a 30km climb then decent then a 3rd cat climb before a 10km descent to the finish. I tried for the early break but that was a fail as the climb started 20km into the stage. Also once on the climb I was regretting the breakaway attempts. I managed to come in 37th on the stage just over 10 minutes down on the winner and the brothers both rolled in 4 minutes down on the winner showing they are up for a good GC ride.
Stage Five 235km flat and set to be a bit boring work for the sprint again was the plan. The day was a long a boring one with no action happening until 15km to go where the race split in the cross winds but all came back together. There was a crash in the final 3km which held the team up still 4 on the same time as the winner.
Stage Six 66km mountain top finish topping out at 4120m. The plan was to ride at the front for our climbers. The stage ended up been 57km as they skipped a lap by mistake before the climb. The two climbers finished 12th and 15th on the stage and I finished 36th to move the team up to 5th in the team GC. 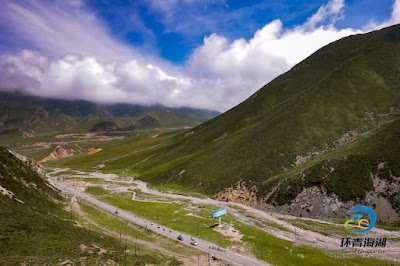 Stage Severn 169km which didn't go to plan with Tipper getting dropped on the climb. So I tried going away 40km to go but got caught 15km to go with only one other rider with me.
Stage Eight 237km dropping from 3500m to 1500m so it was to be a fast day and that it was averaging 49kph. We set Tipper up for the sprint he got a bit swamped and got 24th.
Stage Nine 175km the last stage before the rest day thankfully. We road for Tipper all day and he delivered 11th his best result so far. and good confidence boost for him going into the rest day and the final 4 days which are all sprint days on paper.
Stage Ten 123km in the dessert so it was expected to be crosswinds. We rode near the front all day to ensure if it split we would make the front group. The race didn't split but going into the final 8km there was a turn before cross head wind to the finish. We lost each other and some slipped back and only Sam held position so unfortunately Tipped didn't get the chance to sprint. Sam rolled his best result on the tour to date with 20th.
Stage Eleven 111km flat ciurcut race perfect for tipper at lower altitude as well. We went for a different leadout approach for Tipper on this stage with him following only Sam through the bunch. It took time to get Tipper to make sure to follow Sam all day through gaps as practice but he started doing it well with me behind him incase he needed back up. This worked really well for him and he managed to deliver big time for us with an epic stage win. Making the team spirit so high and also giving himself massive confidence in his abilities and the teams.
Stage Twelve 106km another flat day with very little action till the end. We went with the same plan as the previous stage but it wasn't to be with Tipper losing Sam's wheel and trying to move up in the wind himself he blew before the sprint opened up.
Stage Thirteen 108km the final stage of the tour and it wasn't going to be a procession day with the green jersey battle on it was fast from the offset and continued all the way to the end. Sam once again was to surf the wheels in the sprint for Tipper. He once again did a fantastic job for the team but knowing Tipper was struggling he also was going for a personal result which he managed by getting 11th on the stage all down to great positioning.
With the 17th Tour of Qinghai Lake over and the teams first ever UCI HC race. I personally think it went really well for the team and myself. We got a stage win, 5th on the team GC, 11th and 13th on the individual GC and several top 20s. Also we showed everyday we were there to race hand and not just there to make he numbers up.

Returning home for a bit of down time and a few nights out for my birthday before training again before going back to China at the end of August for another race block out there. I was so tired the first week I was back and spent the majority of my time sleeping and been very unproductive with my time.
Posted by Unknown at 03:25