Rest and then Sweden bound!

After a solid start to the season with a great block of training in Spain then racing in Rhodes, Taiwan and Morocco it was time for a mini break and have some time to chill out. I had 2 weeks at home before I left for Sweden so I just did what I wanted and rode my bike for enjoyment, I mainly rode to cafes with my mates and I did the odd local race for fun. I spent this time at home catching up with friends and family.
I had a day/night out in Newcastle with mates to take my mind of cycling and just relax and enjoy myself, before going to Sweden to start racing and training again and get in shape for the National Championships in June.
The 2 weeks at home flew over and it was time to pack and fly to Sweden. I landed in Sweden the day before the first race there. The race was on the evening so I went for a little spin on the morning to loosen the legs after the flight the day before. The race was a crit in the centre of Gothenberg, the 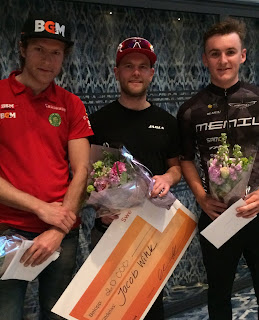 lap was very technical with 12 corners in 1.1km's. I wasn't expecting a result here as these things aren't my favorite types of race. I was hanging on in around 20th position waiting for the pace to drop as it normally does in these races you just need to make it past 30 minutes. It eased right up after 40 minutes for a moment and at this point I attacked the was 1 rider away as he got clear a lap earlier for the sprint lap. I caught him and another rider caught us. With the laps been so technical it was hard to work together and the 3 of us split into ones due to our cornering abilities. I wasn't able to hold on to them and ended up been the third rider, luckily I was able to stay away from the bunch thanks to the help of my team mates behind and crossed the line in third place a result for me and the team that we didn't expect just over an hour before.
The following morning we were doing a 140km road race around the local area of Gothenburg. The teams plan was to win this race. So we set out to do this, we only had a 3 man team here and other teams had 6-10 riders. We worked great as a team and had full control over the race from the start. Getting in every move and really animating the race. After 60km I got away solo in a cross head wind section. I stayed away until 105km at this point my team mates had been covering other moves and a group of 8 caught me with the peleton just behind. Both my team mates were in this group, we worked hard to try take this group away from the peleton but it came back together. As it came back together Yannick attacked and formed a 6 man break with my other team mate Pierre in it. Once the break got a gap Yannick attacked again and went solo all the way to the finish. For some time Pierre was in the gap riding for second but was caught by the bunch in the final few kilometers. He managed to stay with the bunch and sprint in for 6th. We did what we planned to do and took the win in the race. A great first weekend in Sweden with 2 podiums in 2 days.
Now it was time drive down to Bastad where the team own a house for us to stay in. This would be my home for the next 3 weeks. It has both flat and hilly roads to train on which is perfect. I was mainly on my own as Yannick had business to do else where. I had one week of decent training before a trip to Uppsala for the UCI 1.2 Scandinavian race in Uppsala. This was on a technical 12km lap and covered 15 laps. The team got one rider in the early break which got caught in the final lap. I was on a very bad day and wasn't able to offer much help at all for the team which is very disappointing for me and the team. It was a big day of learning for me though, the race was of a high level and raced different to any race I have done before. Even though I was terrible on the day I feel I have came away from the race better off due to the experience gained.
Time to head back to Bastad for 2 weeks solid training before going to Estonia for The Tour of Estonia UCI 2.1. With Yannick having to go home for the next week and a half I had to drive the team car back. This drive was straight after the race and covered over 600km, adding to that it was my first ever time driving a left hand drive car. Talk about getting thrown in at the deep end. The drive went fine and I eventually got to bed just after 2:45 am. I had the day after the drive as a rest day due to such a long day the day before.
After the rest day I planned for a training block of 4 days on 1 off 4 on then easy days until Estonia. The first 4 day block went to plan fine and did the training I planned and hit the numbers I wanted. After a rest day I started my next block, I did the first 2 days fine but on the 3rd day I woke up absolutely shattered so instead of pushing myself to the plan I listened to the body and had and easier day and hoped it was a 1 day thing and not me coming down with something.
Now my training is over and hopefully soaking in well. Tomorrow I will be heading to Estonia for the Tour of Estonia UCI 2.1 race what starts on Friday. Which give me more than enough time to recover from the block of training and be feeling good for the racing to come at the weekend.
Posted by Unknown at 14:32