Tour Du Maroc and the rest of April.

Tour Du Maroc:
I arrived in Casablanca two days before the race started. This was plenty of time to get ready for the race and everything sorted ready for ten days of racing. The roads were limited for training on for those two days. The team and I were able to do enough to riding to keep ticking over before the tour started.
The race had a good field with the key teams being Willier Trestina and Vandee U. Willier had their Giro team there as the race is over ten days and covers close to 1600km. 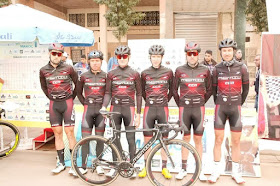 Stage 1, was a potential sprint day or the chance of a late break winning. Willier from the very start showed they wanted it to be a sprint only letting 3 riders in the break and controlling the pace from the early kilometers. The teams plan was to work for Tipper for the sprint, so we rode a high position all day as a team and kept Tipper out of trouble. Sure enough the day ended in a bunch sprint and Tipper was able to get 6th on the stage.
Stage 2, I rode two years ago and it ended in a sprint, so the teams plan was again to ride for Tipper for the sprint. The weather was awful with very low temperatures and rain it was set to be a hard day out. In the first 40km there was a 2nd category climb. Willier once again set the tempo and allowed a small group of four riders to go early and they took up the pace setting. We rode up near the front next to them. Once on the 2nd cat climb it looked like it was going to stay together but with 2km to go till the summit attacks started and a large group formed ahead. Willier had no riders present so we stuck to the plan and stayed with Tipper thinking the group might come back after the climb as it was still 130km till the finish. Unfortunatly we were wrong and that group went on to win the stage by over 20 minutes.
Stage 3 was 200km and completely flat. This was a relatively easy stage with it ending in a bunch sprint. Unfortunately our lead out got split up going around a roundabout and Tipper had to do a lot of work himself in the final kilometer and finished 12th. 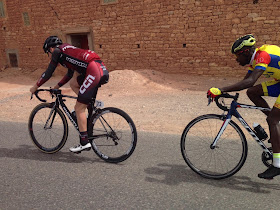 Stage 4 the Queen stage, 200km with three 2nd cat climbs, a 1st cat climb then a 3rd cat climb. The plan was to get in the break an hope it could have been the winning move. I managed to get in the break but it wasn't to be, the peleton only allowed the break to get a maximum of 2 minutes. I managed to hang on over the 3rd 2nd cat climb of the day after been caught just before it and then I got distanced on the 1st cat climb. I went over the climb in the 3rd group but punctured on the descent and had to wait over 5 minutes for a wheel change as the race was in bits. This meant I ended up doing the final 70km on my own, making the stage a very damaging one for my legs for a very poor result.
Stage 5 Tipper said he wasn't feeling great so didn't want us to ride for him so the only option for the team was to get in the break. Sam got in an early move which came back so I followed the next attack and this turn out to be the main break for the day. Every main team was represented and it looked like it could have been the winning break. Willier must have had a plan though as their sprinter Mareczko made it over the climb of the day so their guy from the break dropped back and they chased hard. When the gap was under a minute with still 60km to go I decided to drop back to try help the team if Tipper was still in the bunch. As I got into the bunch I found out Tipper had crashed, he was alright and back on the bike but was just riding into the finish in the groupetto.
Stage 6 I woke up ill with cold. The stage was fairly flat but very windy. It split early on with Sam and Tipper making the front split, Pierre and myself were in the second group which made it back on after 20km. After around 90km attacks started and we were covering them but missed a very important one. So I decided to chase it down for Tipper, Sam saw me doing so and came to help. For about 15km Sam and I worked with Baku to help bring it back. Pierre then came to help bringing the yellow jersey team as the group away had a few guys that could take yellow if it stuck. with about 60km to go we had brought the group back. Attacks started again and Tipper was all over them as we had worked so hard for him. He managed to get in the move that stuck to the line and he took the win. This topped off a great day for the team and was a great win for him to get.
Stage 7 another sprint stage. Team worked well but had bad luck in the final kilometer with Tipper puncturing.
Stage 8. Pierre made the break of the day which was caught on the line. He managed to get 5th while Tipper was 4th. A solid team performance again by sticking to the plan from the team meeting.
Stage 9 the penultimate stage and another pure sprint stage. Not much happened till the final few kilometers. We were fighting for position in the final 3km for Tipper, with 2km to go the road split and we took the wrong side and it left Tipper exposed too early. He managed to get 7th on the stage.
stage 10 only 128km with six 5km finishing laps in Casablanca. The team took up control with 40km to go to bring the break back and keep Tipper out of trouble on the finishing laps. On the final lap it got fairly chaotic in with 2.5km to go as at this point there was a dead turn in the middle of the road. we managed to get Tipper well placed for the final corner and he was able to get 4th to finish off the tour for the team. It was good to finish the race on a high with use working hard and well as a team and then delivering a top 5 at the end of it all.
Only one week until the next race Rutland Melton Cicle Classic. So it was two days off the bike including the travel day then back into training. I wasn't able to train fully as I was loaded with cold but managed to keep active and for the cold to nearly fully clear up in time to race.
Rutland Melton Cicle Classic:
Still not feeling 100% it was time to pin a number on again and get stuck in for the day. The race didn't go to plan for me having three rear wheel changes within 50km of each other. The 3rd change ended my race due to the timing of it and how long it was till the cars could get to me. Tipper and Pierre were still riding strong until bad luck hit both of them taking them out of the peleton. Tipper eventually had to settle with finishing 3rd group and Pierre in the 4th group. Rob stuck in to get the last finisher prize. Not the day we hoped for after such a successful Tour Du Maroc but that's bike racing.
After Rutland I took three day off the bike and then two very easy day as a break was needed to get rid of the cold completely. Off the back of the easy week I did a time trial as it was in my village. I managed to be the fastest on the day by 39 seconds even though my power was down due to the time off. Now it's time to start training hard for the next block of racing for the team that will take me up to the nationals. 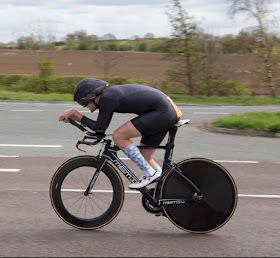